CKEditor is a ready-for-use HTML text editor designed to simplify web content creation. It's a WYSIWYG editor that brings common word processor features directly to your web pages. It benefits from an active community that is constantly evolving the application with free add-ons and a transparent development process.

This sample shows how to use the setReadOnly API to put editor into the read-only state that makes it impossible for users to change the editor contents. In readonly mode all toolbar buttons are disabled, except copy, full screen and source buttons, they are still accessible. Content is selectable, but not editable.

This sample shows how to configure the Enter and Shift+Enter keys to perform actions specified in the enterMode and shiftEnterMode parameters, respectively. You can choose from the following options: ENTER_P – new <p> paragraphs are created; ENTER_BR – lines are broken with <br> elements; ENTER_DIV – new <div> blocks are created. 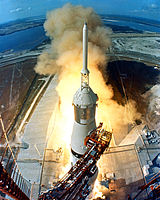 Apollo 11 was the spaceflight that landed the first humans, Americans Neil Armstrong and Buzz Aldrin, on the Moon on July 20, 1969, at 20:18 UTC. Armstrong became the first to step onto the lunar surface 6 hours later on July 21 at 02:56 UTC.

Armstrong spent about three and a half two and a half hours outside the spacecraft, Aldrin slightly less; and together they collected 47.5 pounds (21.5 kg) of lunar material for return to Earth. A third member of the mission, Michael Collins, piloted the command spacecraft alone in lunar orbit until Armstrong and Aldrin returned to it for the trip back to Earth.

Launched by a Saturn V rocket from Kennedy Space Center in Merritt Island, Florida on July 16, Apollo 11 was the fifth manned mission of NASA's Apollo program. The Apollo spacecraft had three parts:

After being sent to the Moon by the Saturn V's upper stage, the astronauts separated the spacecraft from it and travelled for three days until they entered into lunar orbit. Armstrong and Aldrin then moved into the Lunar Module and landed in the Sea of Tranquility. They stayed a total of about 21 and a half hours on the lunar surface. After lifting off in the upper part of the Lunar Module and rejoining Collins in the Command Module, they returned to Earth and landed in the Pacific Ocean on July 24.